AND FOR THE MUSIC MAGPIES! 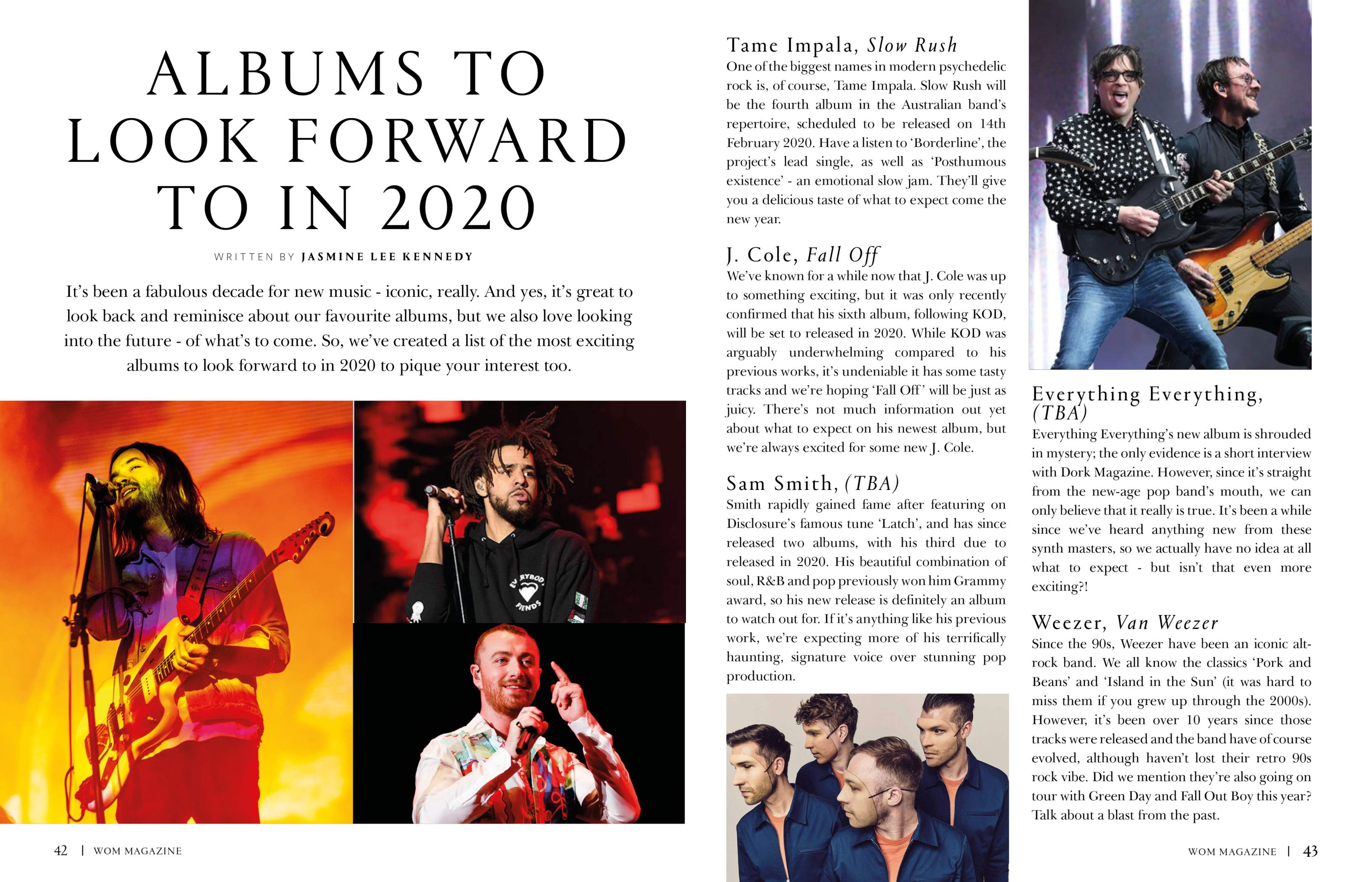 ALBUMS TO LOOK FORWARD TO IN 2020
WRITTEN BY JASMINE LEE KENNEDY
It’s been a fabulous decade for new music – iconic, really. And yes, it’s great to look back and reminisce about our favourite albums, but we also love looking into the future – of what’s to come. So, we’ve created a list of the most exciting albums to look forward to in 2020 to pique your interest too.

One of the biggest names in modern psychedelic rock is, of course, Tame Impala. Slow Rush will be the fourth album in the Australian band’s repertoire, scheduled to be released on 14th February 2020. Have a listen to ‘Borderline’, the project’s lead single, as well as ‘Posthumous existence’ – an emotional slow jam. They’ll give you a delicious taste of what to expect come the new year.

We’ve known for a while now that J. Cole was up to something exciting, but it was only recently confirmed that his sixth album, following KOD, will be set to released in 2020. While KOD was arguably underwhelming compared to his previous works, it’s undeniable it has some tasty tracks and we’re hoping ‘Fall Off’ will be just as juicy. There’s not much information out yet about what to expect on his newest album, but we’re always excited for some new J. Cole.

Smith rapidly gained fame after featuring on Disclosure’s famous tune ‘Latch’, and has since released two albums, with his third due to released in 2020. His beautiful combination of soul, R&B and pop previously won him Grammy award, so his new release is definitely an album to watch out for. If it’s anything like his previous work, we’re expecting more of his terrifically haunting, signature voice over stunning pop production.

Everything Everything’s new album is shrouded in mystery; the only evidence is a short interview with Dork Magazine. However, since it’s straight from the new-age pop band’s mouth, we can only believe that it really is true. It’s been a while since we’ve heard anything new from these synth masters, so we actually have no idea at all what to expect – but isn’t that even more exciting?!

Since the 90s, Weezer have been an iconic alt-rock band. We all know the classics ‘Pork and Beans’ and ‘Island in the Sun’ (it was hard to miss them if you grew up through the 2000s). However, it’s been over 10 years since those tracks were released and the band have of course evolved, although haven’t lost their retro 90s rock vibe. Did we mention they’re also going on tour with Green Day and Fall Out Boy this year? Talk about a blast from the past.