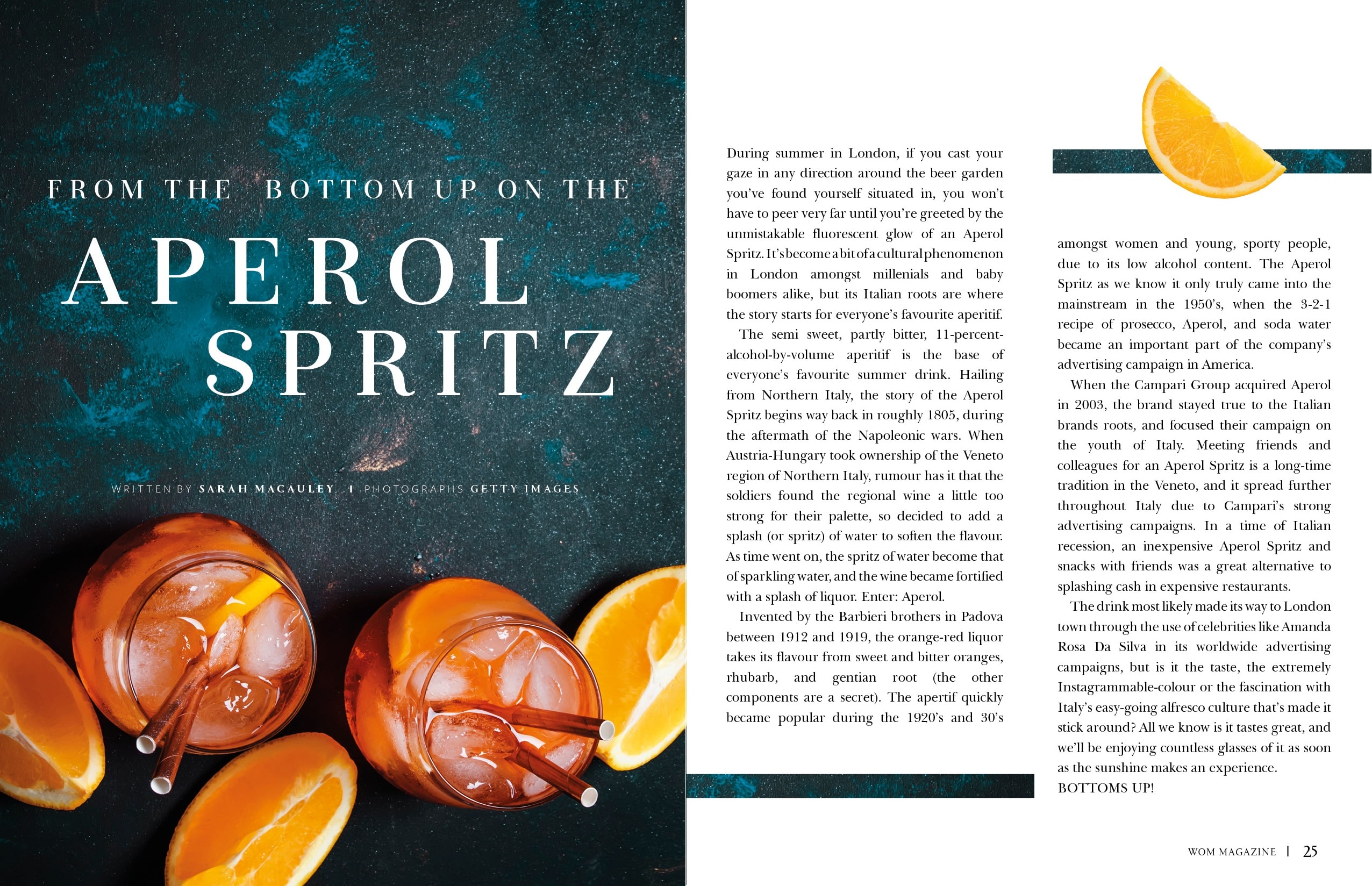 During summer in London, if you cast your gaze in any direction around the beer garden you’ve found yourself situated in, you won’t have to peer very far until you’re greeted by the unmistakable fluorescent glow of an Aperol Spritz. It’s become a bit of a cultural phenomenon in London amongst millenials and baby boomers alike, but its Italian roots are where the story starts for everyone’s favourite aperitif. The semi sweet, partly bitter, 11-percentalcohol-by-volume aperitif is the base of everyone’s favourite summer drink. Hailing from Northern Italy, the story of the Aperol Spritz begins way back in roughly 1805, during the aftermath of the Napoleonic wars. When Austria-Hungary took ownership of the Veneto region of Northern Italy, rumour has it that the soldiers found the regional wine a little too strong for their palette, so decided to add a splash (or spritz) of water to soften the flavour. As time went on, the spritz of water become that of sparkling water, and the wine became fortified with a splash of liquor. Enter: Aperol. Invented by the Barbieri brothers in Padova between 1912 and 1919, the orange-red liquor takes its flavour from sweet and bitter oranges, rhubarb, and gentian root (the other components are a secret). The apertif quickly became popular during the 1920’s and 30’s
APEROL FROM THE BOTTOM UP ON THE SPRITZ
amongst women and young, sporty people, due to its low alcohol content. The Aperol Spritz as we know it only truly came into the mainstream in the 1950’s, when the 3-2-1 recipe of prosecco, Aperol, and soda water became an important part of the company’s advertising campaign in America. When the Campari Group acquired Aperol in 2003, the brand stayed true to the Italian brands roots, and focused their campaign on the youth of Italy. Meeting friends and colleagues for an Aperol Spritz is a long-time tradition in the Veneto, and it spread further throughout Italy due to Campari’s strong advertising campaigns. In a time of Italian recession, an inexpensive Aperol Spritz and snacks with friends was a great alternative to splashing cash in expensive restaurants. The drink most likely made its way to London town through the use of celebrities like Amanda Rosa Da Silva in its worldwide advertising campaigns, but is it the taste, the extremely Instagrammable-colour or the fascination with Italy’s easy-going alfresco culture that’s made it stick around? All we know is it tastes great, and we’ll be enjoying countless glasses of it as soon as the sunshine makes an experience. BOTTOMS UP!

CAN RED WINE BENEFIT YOUR HEALTH?