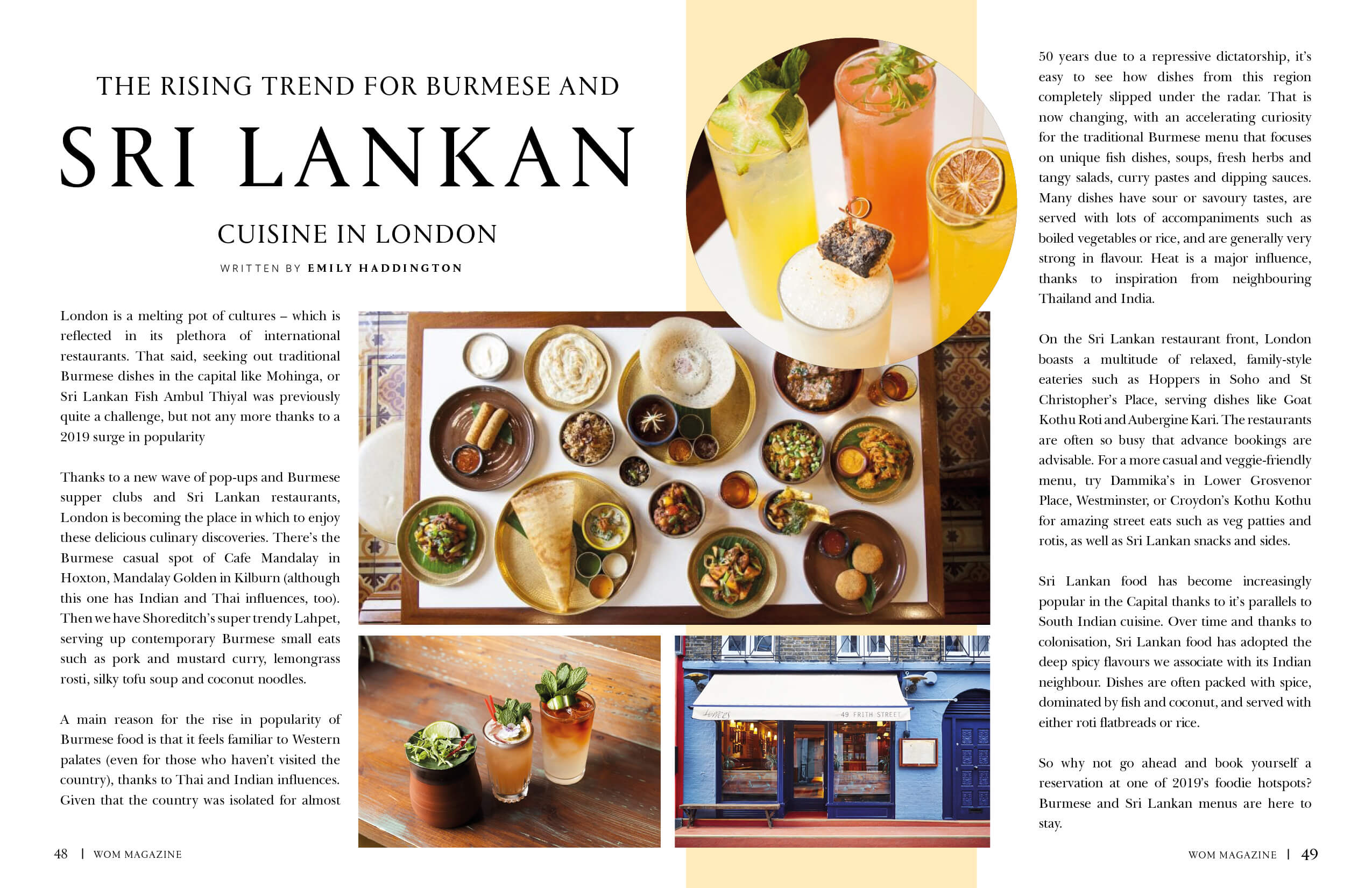 London is a melting pot of cultures – which is reflected in its plethora of international restaurants. That said, seeking out traditional Burmese dishes in the capital like Mohinga, or Sri Lankan Fish Ambul Thiyal was previously quite a challenge, but not any more thanks to a 2019 surge in popularity
Thanks to a new wave of pop-ups and Burmese supper clubs and Sri Lankan restaurants, London is becoming the place in which to enjoy these delicious culinary discoveries. There’s the Burmese casual spot of Cafe Mandalay in Hoxton, Mandalay Golden in Kilburn (although this one has Indian and Thai influences, too). Then we have Shoreditch’s super trendy Lahpet, serving up contemporary Burmese small eats such as pork and mustard curry, lemongrass rosti, silky tofu soup and coconut noodles.
A main reason for the rise in popularity of Burmese food is that it feels familiar to Western palates (even for those who haven’t visited the country), thanks to Thai and Indian influences. Given that the country was isolated for almost
50 years due to a repressive dictatorship, it’s easy to see how dishes from this region completely slipped under the radar. That is now changing, with an accelerating curiosity for the traditional Burmese menu that focuses on unique fish dishes, soups, fresh herbs and tangy salads, curry pastes and dipping sauces. Many dishes have sour or savoury tastes, are served with lots of accompaniments such as boiled vegetables or rice, and are generally very strong in flavour. Heat is a major influence, thanks to inspiration from neighbouring Thailand and India.
On the Sri Lankan restaurant front, London boasts a multitude of relaxed, family-style eateries such as Hoppers in Soho and St Christopher’s Place, serving dishes like Goat Kothu Roti and Aubergine Kari. The restaurants are often so busy that advance bookings are advisable. For a more casual and veggie-friendly menu, try Dammika’s in Lower Grosvenor Place, Westminster, or Croydon’s Kothu Kothu for amazing street eats such as veg patties and rotis, as well as Sri Lankan snacks and sides.
Sri Lankan food has become increasingly popular in the Capital thanks to it’s parallels to South Indian cuisine. Over time and thanks to colonisation, Sri Lankan food has adopted the deep spicy flavours we associate with its Indian neighbour. Dishes are often packed with spice, dominated by fish and coconut, and served with either roti flatbreads or rice.
So why not go ahead and book yourself a reservation at one of 2019’s foodie hotspots? Burmese and Sri Lankan menus are here to stay.
THE

46 FITNESS HASH TAGS TO GET YOU NOTICED