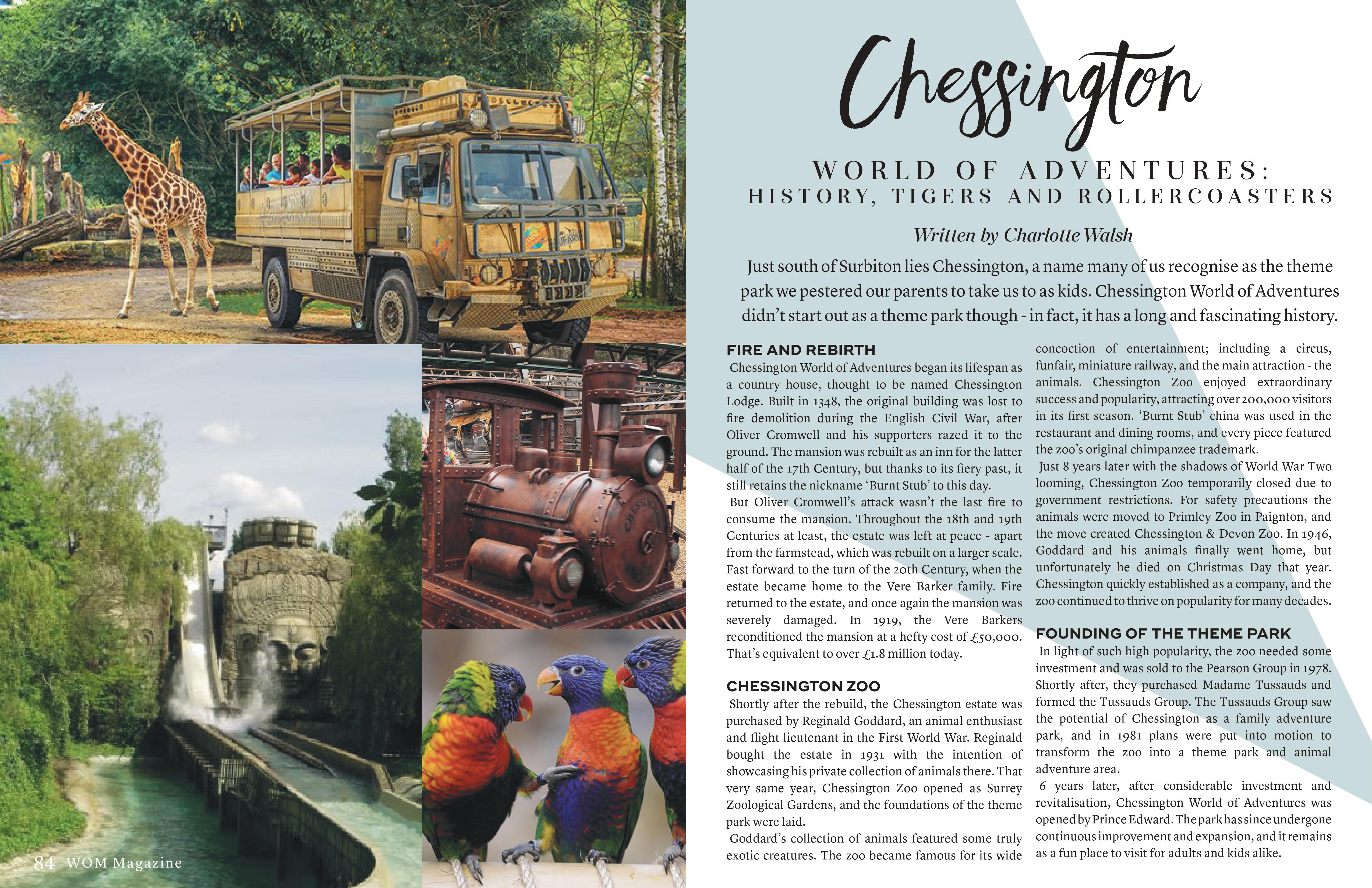 Just south of Surbiton lies Chessington, a name many of us recognise as the theme park we pestered our parents to take us to as kids. Chessington World of Adventures didn’t start out as a theme park though – in fact, it has a long and fascinating history.
FIRE AND REBIRTH Chessington World of Adventures began its lifespan as a country house, thought to be named Chessington Lodge. Built in 1348, the original building was lost to fire demolition during the English Civil War, after Oliver Cromwell and his supporters razed it to the ground. The mansion was rebuilt as an inn for the latter half of the 17th Century, but thanks to its fiery past, it still retains the nickname ‘Burnt Stub’ to this day. But Oliver Cromwell’s attack wasn’t the last fire to consume the mansion. Throughout the 18th and 19th Centuries at least, the estate was left at peace – apart from the farmstead, which was rebuilt on a larger scale. Fast forward to the turn of the 20th Century, when the estate became home to the Vere Barker family. Fire returned to the estate, and once again the mansion was severely damaged. In 1919, the Vere Barkers reconditioned the mansion at a hefty cost of £50,000. That’s equivalent to over £1.8 million today.
CHESSINGTON ZOO Shortly after the rebuild, the Chessington estate was purchased by Reginald Goddard, an animal enthusiast and flight lieutenant in the First World War. Reginald bought the estate in 1931 with the intention of showcasing his private collection of animals there. That very same year, Chessington Zoo opened as Surrey Zoological Gardens, and the foundations of the theme park were laid. Goddard’s collection of animals featured some truly exotic creatures. The zoo became famous for its wide
concoction of entertainment; including a circus, funfair, miniature railway, and the main attraction – the animals. Chessington Zoo enjoyed extraordinary success and popularity, attracting over 200,000 visitors in its first season. ‘Burnt Stub’ china was used in the restaurant and dining rooms, and every piece featured the zoo’s original chimpanzee trademark. Just 8 years later with the shadows of World War Two looming, Chessington Zoo temporarily closed due to government restrictions. For safety precautions the animals were moved to Primley Zoo in Paignton, and the move created Chessington & Devon Zoo. In 1946, Goddard and his animals finally went home, but unfortunately he died on Christmas Day that year. Chessington quickly established as a company, and the zoo continued to thrive on popularity for many decades.
FOUNDING OF THE THEME PARK In light of such high popularity, the zoo needed some investment and was sold to the Pearson Group in 1978. Shortly after, they purchased Madame Tussauds and formed the Tussauds Group. The Tussauds Group saw the potential of Chessington as a family adventure park, and in 1981 plans were put into motion to transform the zoo into a theme park and animal adventure area. 6 years later, after considerable investment and revitalisation, Chessington World of Adventures was opened by Prince Edward. The park has since undergone continuous improvement and expansion, and it remains as a fun place to visit for adults and kids alike.