LONDON DUNGEON THE HOME OF HALLOWEEN 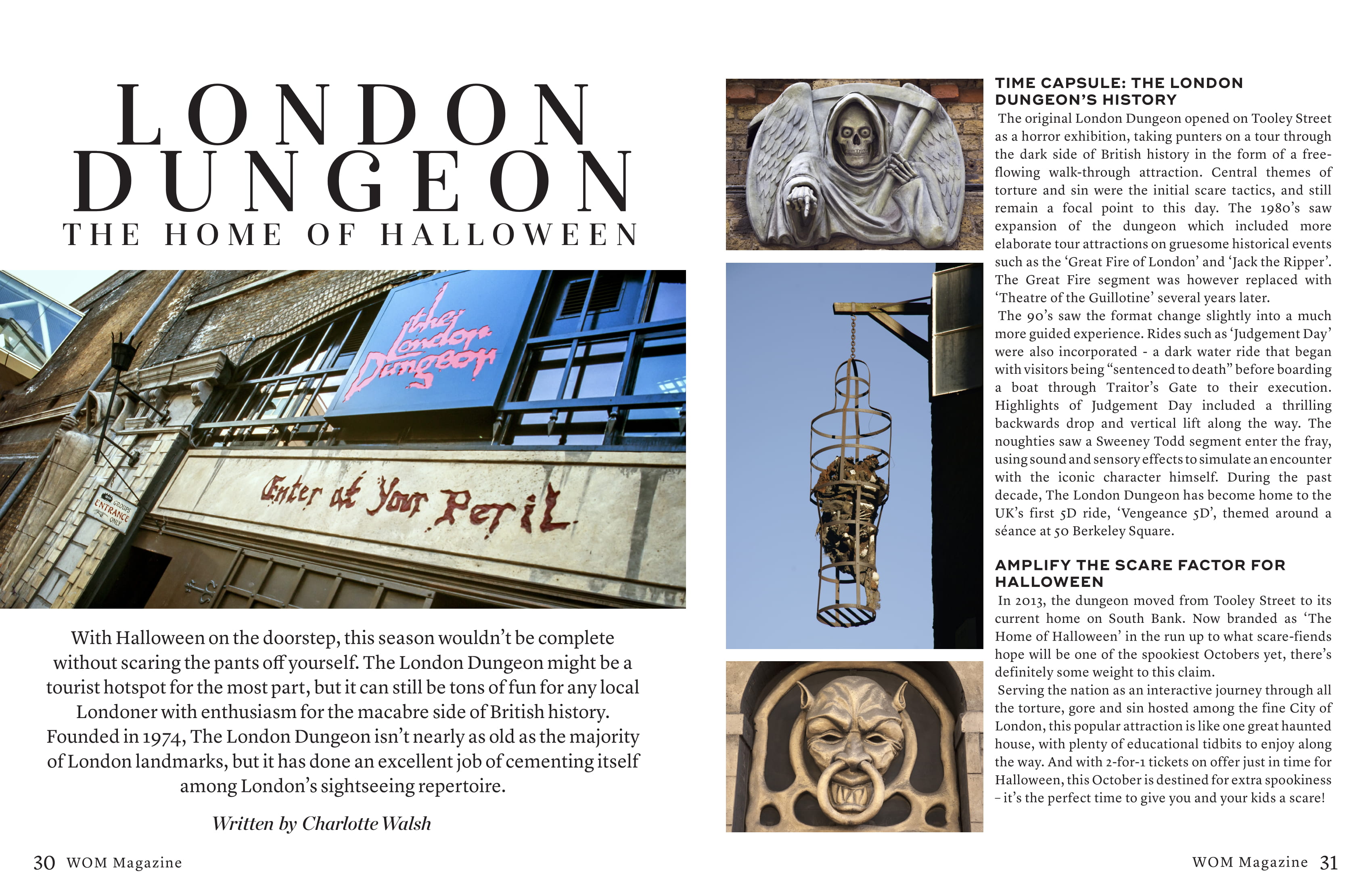 With Halloween on the doorstep, this season wouldn’t be complete without scaring the pants off yourself. The London Dungeon might be a tourist hotspot for the most part, but it can still be tons of fun for any local Londoner with enthusiasm for the macabre side of British history. Founded in 1974, The London Dungeon isn’t nearly as old as the majority of London landmarks, but it has done an excellent job of cementing itself among London’s sightseeing repertoire.

TIME CAPSULE: THE LONDON DUNGEON’S HISTORY The original London Dungeon opened on Tooley Street as a horror exhibition, taking punters on a tour through the dark side of British history in the form of a freeflowing walk-through attraction. Central themes of torture and sin were the initial scare tactics, and still remain a focal point to this day. The 1980’s saw expansion of the dungeon which included more elaborate tour attractions on gruesome historical events such as the ‘Great Fire of London’ and ‘Jack the Ripper’. The Great Fire segment was however replaced with ‘Theatre of the Guillotine’ several years later. The 90’s saw the format change slightly into a much more guided experience. Rides such as ‘Judgement Day’ were also incorporated – a dark water ride that began with visitors being “sentenced to death” before boarding a boat through Traitor’s Gate to their execution. Highlights of Judgement Day included a thrilling backwards drop and vertical lift along the way. The noughties saw a Sweeney Todd segment enter the fray, using sound and sensory effects to simulate an encounter with the iconic character himself. During the past decade, The London Dungeon has become home to the UK’s first 5D ride, ‘Vengeance 5D’, themed around a séance at 50 Berkeley Square.
AMPLIFY THE SCARE FACTOR FOR HALLOWEEN In 2013, the dungeon moved from Tooley Street to its current home on South Bank. Now branded as ‘The Home of Halloween’ in the run up to what scare-fiends hope will be one of the spookiest Octobers yet, there’s definitely some weight to this claim. Serving the nation as an interactive journey through all the torture, gore and sin hosted among the fine City of London, this popular attraction is like one great haunted house, with plenty of educational tidbits to enjoy along the way. And with 2-for-1 tickets on offer just in time for Halloween, this October is destined for extra spookiness – it’s the perfect time to give you and your kids a scare!

THE BIG SCREEN VS THE LITTLE SCREEN

3 SLOW COOKER RECIPES YOU SHOULD TRY