NOT A HAPPY BUNNY 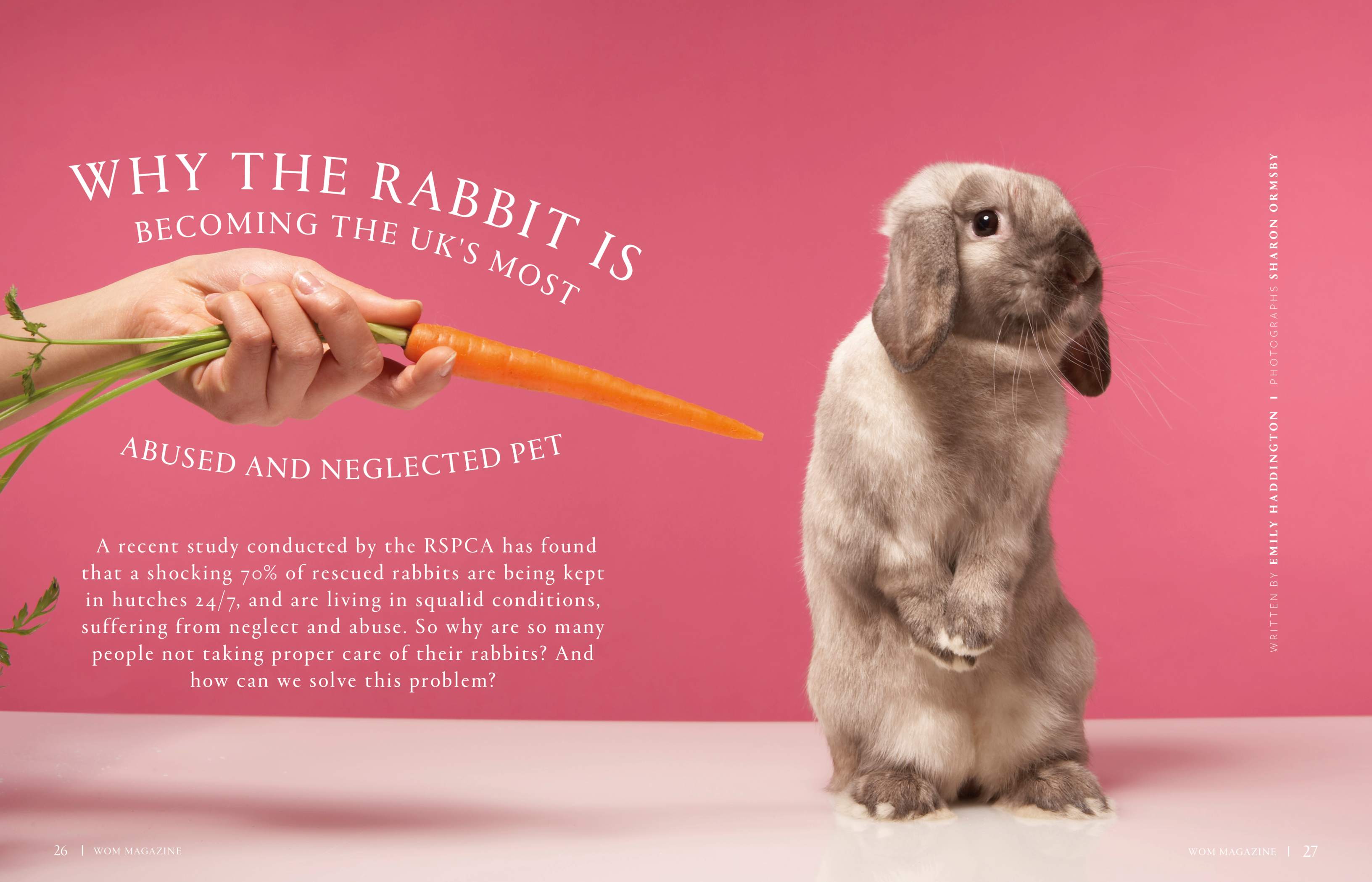 WHY THE RABBIT IS BECOMING THE UK’S MOST ABUSED AND NEGLECTED PET
WRITTEN BY EMILY HADDINGTON
A recent study conducted by the RSPCA has found that a shocking 70% of rescued rabbits are being kept in hutches 24/7, and are living in squalid conditions, suffering from neglect and abuse. So why are so many people not taking proper care of their rabbits? And how can we solve this problem? 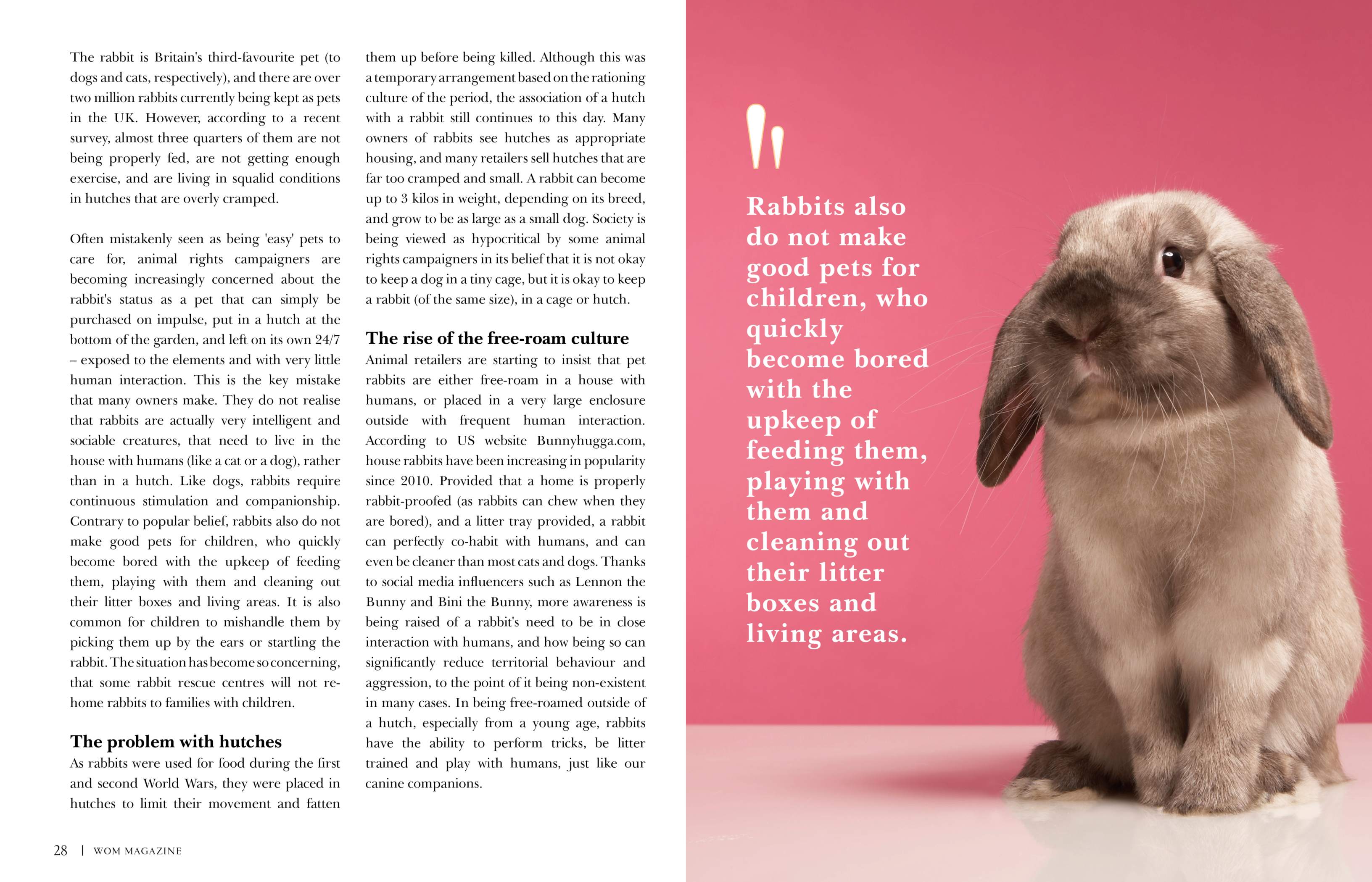 The rabbit is Britain’s third-favourite pet (to dogs and cats, respectively), and there are over two million rabbits currently being kept as pets in the UK. However, according to a recent survey, almost three quarters of them are not being properly fed, are not getting enough exercise, and are living in squalid conditions in hutches that are overly cramped.

Often mistakenly seen as being ‘easy’ pets to care for, animal rights campaigners are becoming increasingly concerned about the rabbit’s status as a pet that can simply be purchased on impulse, put in a hutch at the bottom of the garden, and left on its own 24/7 – exposed to the elements and with very little human interaction. This is the key mistake that many owners make. They do not realise that rabbits are actually very intelligent and sociable creatures, that need to live in the house with humans (like a cat or a dog), rather than in a hutch. Like dogs, rabbits require continuous stimulation and companionship. Contrary to popular belief, rabbits also do not make good pets for children, who quickly become bored with the upkeep of feeding them, playing with them and cleaning out their litter boxes and living areas. It is also common for children to mishandle them by picking them up by the ears or startling the rabbit. The situation has become so concerning, that some rabbit rescue centres will not re-home rabbits to families with children.

The problem with hutches
As rabbits were used for food during the first and second World Wars, they were placed in hutches to limit their movement and fatten them up before being killed. Although this was a temporary arrangement based on the rationing culture of the period, the association of a hutch with a rabbit still continues to this day. Many owners of rabbits see hutches as appropriate housing, and many retailers sell hutches that are far too cramped and small. A rabbit can become up to 3 kilos in weight, depending on its breed, and grow to be as large as a small dog. Society is being viewed as hypocritical by some animal rights campaigners in its belief that it is not okay to keep a dog in a tiny cage, but it is okay to keep a rabbit (of the same size), in a cage or hutch.

The rise of the free-roam culture
Animal retailers are starting to insist that pet rabbits are either free-roam in a house with humans, or placed in a very large enclosure outside with frequent human interaction. According to US website Bunnyhugga.com, house rabbits have been increasing in popularity since 2010. Provided that a home is properly rabbit-proofed (as rabbits can chew when they are bored), and a litter tray provided, a rabbit can perfectly co-habit with humans, and can even be cleaner than most cats and dogs. Thanks to social media influencers such as Lennon the Bunny and Bini the Bunny, more awareness is being raised of a rabbit’s need to be in close interaction with humans, and how being so can significantly reduce territorial behaviour and aggression, to the point of it being non-existent in many cases. In being free-roamed outside of a hutch, especially from a young age, rabbits have the ability to perform tricks, be litter trained and play with humans, just like our canine companions.