Ruffles & Thrills – How to Wear The Frill Trend this Summer 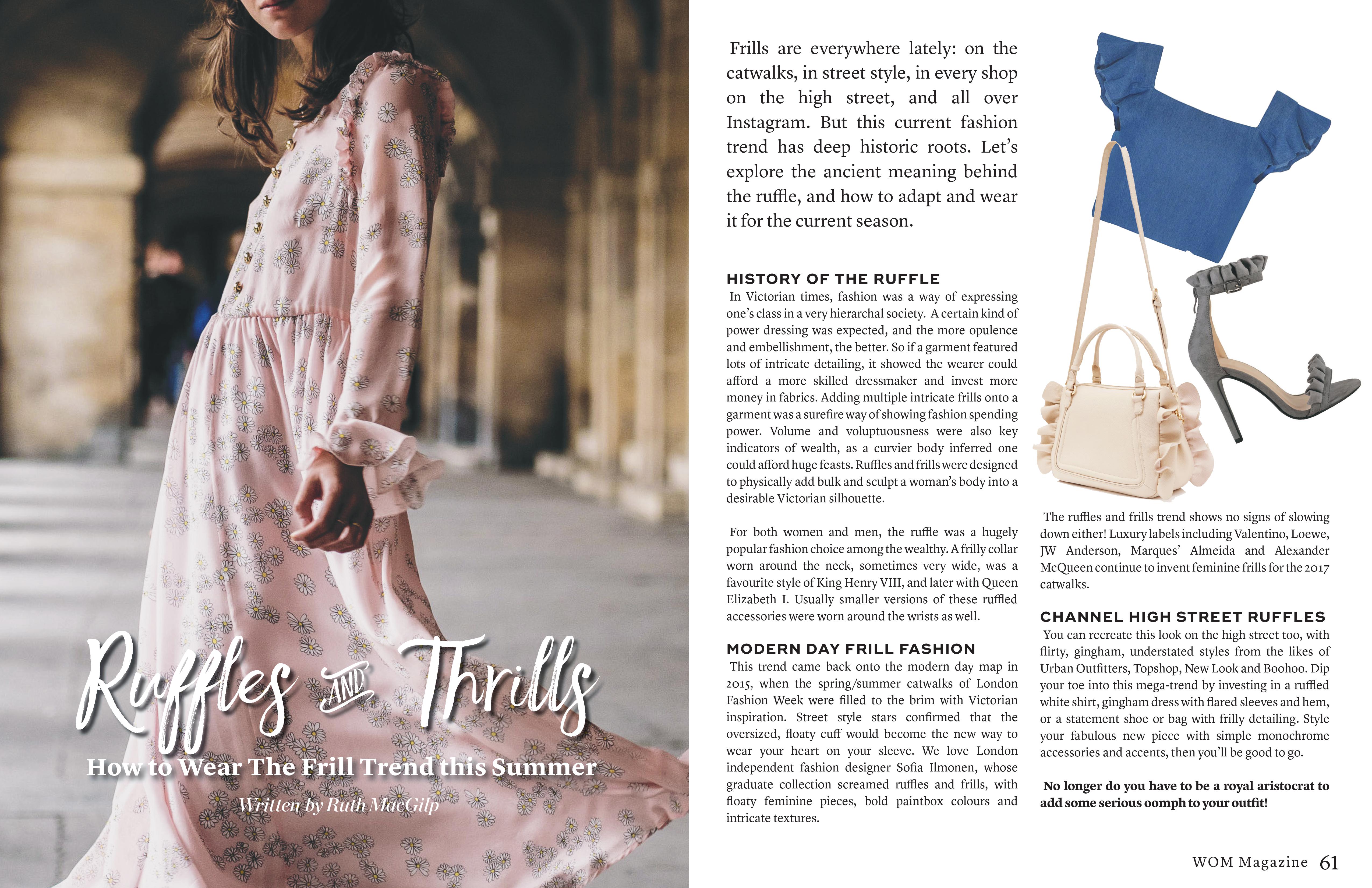 Frills are everywhere lately: on the catwalks, in street style, in every shop on the high street, and all over Instagram. But this current fashion trend has deep historic roots. Let’s explore the ancient meaning behind the ruffle, and how to adapt and wear it for the current season.
HISTORY OF THE RUFFLE In Victorian times, fashion was a way of expressing one’s class in a very hierarchal society. A certain kind of power dressing was expected, and the more opulence and embellishment, the better. So if a garment featured lots of intricate detailing, it showed the wearer could afford a more skilled dressmaker and invest more money in fabrics. Adding multiple intricate frills onto a garment was a surefire way of showing fashion spending power. Volume and voluptuousness were also key indicators of wealth, as a curvier body inferred one could afford huge feasts. Ruffles and frills were designed to physically add bulk and sculpt a woman’s body into a desirable Victorian silhouette.
For both women and men, the ruffle was a hugely popular fashion choice among the wealthy. A frilly collar worn around the neck, sometimes very wide, was a favourite style of King Henry VIII, and later with Queen Elizabeth I. Usually smaller versions of these ruffled accessories were worn around the wrists as well.
MODERN DAY FRILL FASHION This trend came back onto the modern day map in 2015, when the spring/summer catwalks of London Fashion Week were filled to the brim with Victorian inspiration. Street style stars confirmed that the oversized, floaty cuff would become the new way to wear your heart on your sleeve. We love London independent fashion designer Sofia Ilmonen, whose graduate collection screamed ruffles and frills, with floaty feminine pieces, bold paintbox colours and intricate textures.
How to Wear The Frill Trend this Summer Ruffles & Thrills Written by Ruth MacGilp
The ruffles and frills trend shows no signs of slowing down either! Luxury labels including Valentino, Loewe, JW Anderson, Marques’ Almeida and Alexander McQueen continue to invent feminine frills for the 2017 catwalks.
CHANNEL HIGH STREET RUFFLES You can recreate this look on the high street too, with flirty, gingham, understated styles from the likes of Urban Outfitters, Topshop, New Look and Boohoo. Dip your toe into this mega-trend by investing in a ruffled white shirt, gingham dress with flared sleeves and hem, or a statement shoe or bag with frilly detailing. Style your fabulous new piece with simple monochrome accessories and accents, then you’ll be good to go.
No longer do you have to be a royal aristocrat to add some serious oomph to your outfit!

HOW TO STAY HYDRATED THIS SUMMER