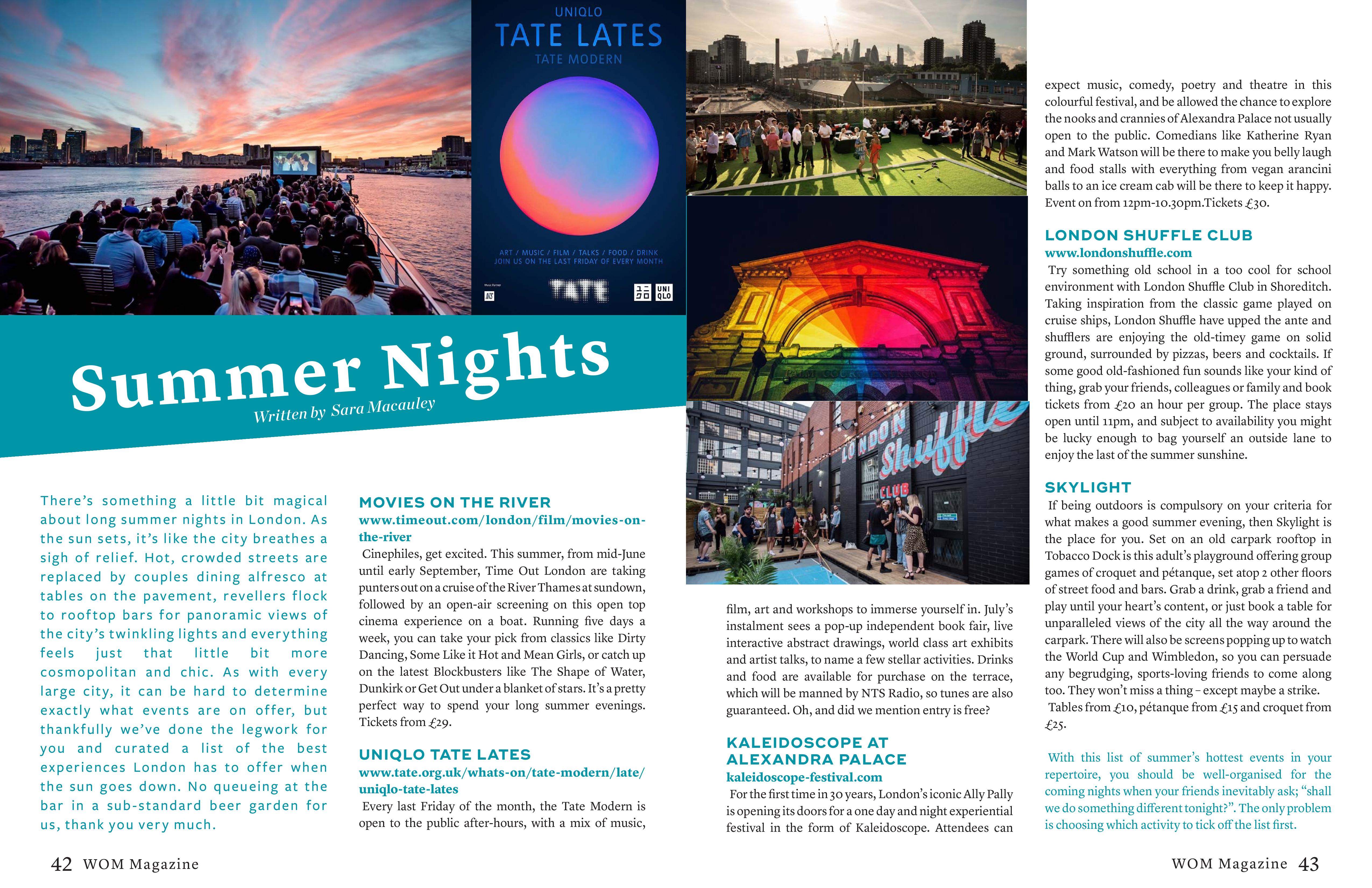 There’s something a little bit magical about long summer nights in London. As the sun sets, it’s like the city breathes a sigh of relief. Hot, crowded streets are replaced by couples dining alfresco at tables on the pavement, revellers flock to rooftop bars for panoramic views of the city’s twinkling lights and everything feels just that little bit more cosmopolitan and chic. As with every large city, it can be hard to determine exactly what events are on offer, but thankfully we’ve done the legwork for you and curated a list of the best experiences London has to offer when the sun goes down. No queueing at the bar in a sub-standard beer garden for us, thank you very much.
MOVIES ON THE RIVER www.timeout.com/london/film/movies-onthe-river Cinephiles, get excited. This summer, from mid-June until early September, Time Out London are taking punters out on a cruise of the River Thames at sundown, followed by an open-air screening on this open top cinema experience on a boat. Running five days a week, you can take your pick from classics like Dirty Dancing, Some Like it Hot and Mean Girls, or catch up on the latest Blockbusters like The Shape of Water, Dunkirk or Get Out under a blanket of stars. It’s a pretty perfect way to spend your long summer evenings. Tickets from £29.
UNIQLO TATE LATES www.tate.org.uk/whats-on/tate-modern/late/ uniqlo-tate-lates Every last Friday of the month, the Tate Modern is open to the public after-hours, with a mix of music,
film, art and workshops to immerse yourself in. July’s instalment sees a pop-up independent book fair, live interactive abstract drawings, world class art exhibits and artist talks, to name a few stellar activities. Drinks and food are available for purchase on the terrace, which will be manned by NTS Radio, so tunes are also guaranteed. Oh, and did we mention entry is free?
KALEIDOSCOPE AT ALEXANDRA PALACE kaleidoscope-festival.com For the first time in 30 years, London’s iconic Ally Pally is opening its doors for a one day and night experiential festival in the form of Kaleidoscope. Attendees can expect music, comedy, poetry and theatre in this colourful festival, and be allowed the chance to explore the nooks and crannies of Alexandra Palace not usually open to the public. Comedians like Katherine Ryan and Mark Watson will be there to make you belly laugh and food stalls with everything from vegan arancini balls to an ice cream cab will be there to keep it happy. Event on from 12pm-10.30pm.Tickets £30.
LONDON SHUFFLE CLUB www.londonshuffle.com Try something old school in a too cool for school environment with London Shuffle Club in Shoreditch. Taking inspiration from the classic game played on cruise ships, London Shuffle have upped the ante and shufflers are enjoying the old-timey game on solid ground, surrounded by pizzas, beers and cocktails. If some good old-fashioned fun sounds like your kind of thing, grab your friends, colleagues or family and book tickets from £20 an hour per group. The place stays open until 11pm, and subject to availability you might be lucky enough to bag yourself an outside lane to enjoy the last of the summer sunshine.
SKYLIGHT If being outdoors is compulsory on your criteria for what makes a good summer evening, then Skylight is the place for you. Set on an old carpark rooftop in Tobacco Dock is this adult’s playground offering group games of croquet and pétanque, set atop 2 other floors of street food and bars. Grab a drink, grab a friend and play until your heart’s content, or just book a table for unparalleled views of the city all the way around the carpark. There will also be screens popping up to watch the World Cup and Wimbledon, so you can persuade any begrudging, sports-loving friends to come along too. They won’t miss a thing – except maybe a strike. Tables from £10, pétanque from £15 and croquet from £25.
With this list of summer’s hottest events in your repertoire, you should be well-organised for the coming nights when your friends inevitably ask; “shall we do something different tonight?”. The only problem is choosing which activity to tick off the list first.

A BRIEF HISTORY OF THE WIMBLEDON CHAMPIONSHIP GAME

HOW TO MAKE YOUR MAKEUP SURVIVE LONDON IN SUMMER