THE BIG SCREEN VS THE LITTLE SCREEN 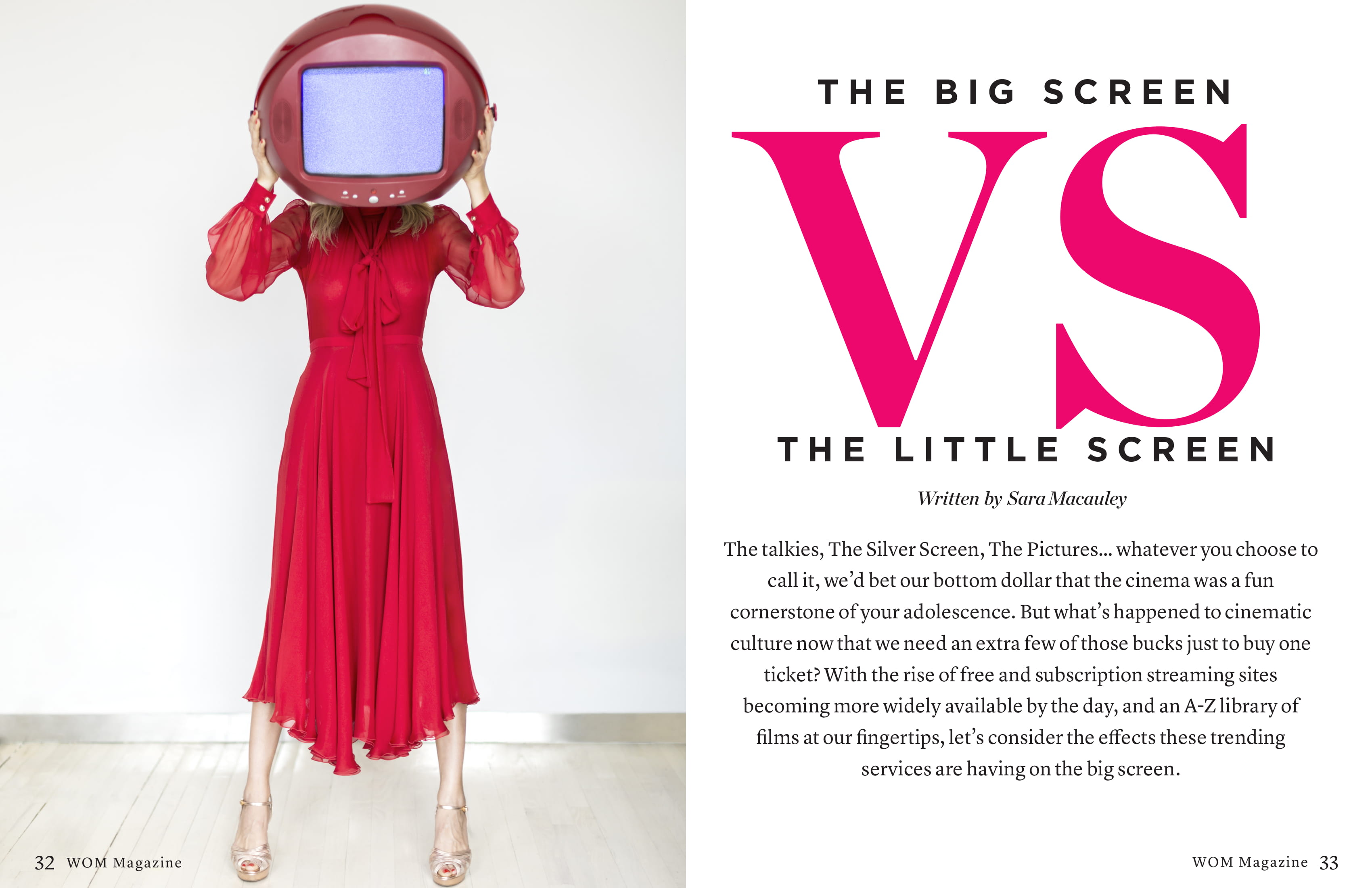 The talkies, The Silver Screen, The Pictures… whatever you choose to call it, we’d bet our bottom dollar that the cinema was a fun cornerstone of your adolescence. But what’s happened to cinematic culture now that we need an extra few of those bucks just to buy one ticket? With the rise of free and subscription streaming sites becoming more widely available by the day, and an A-Z library of films at our fingertips, let’s consider the effects these trending services are having on the big screen. 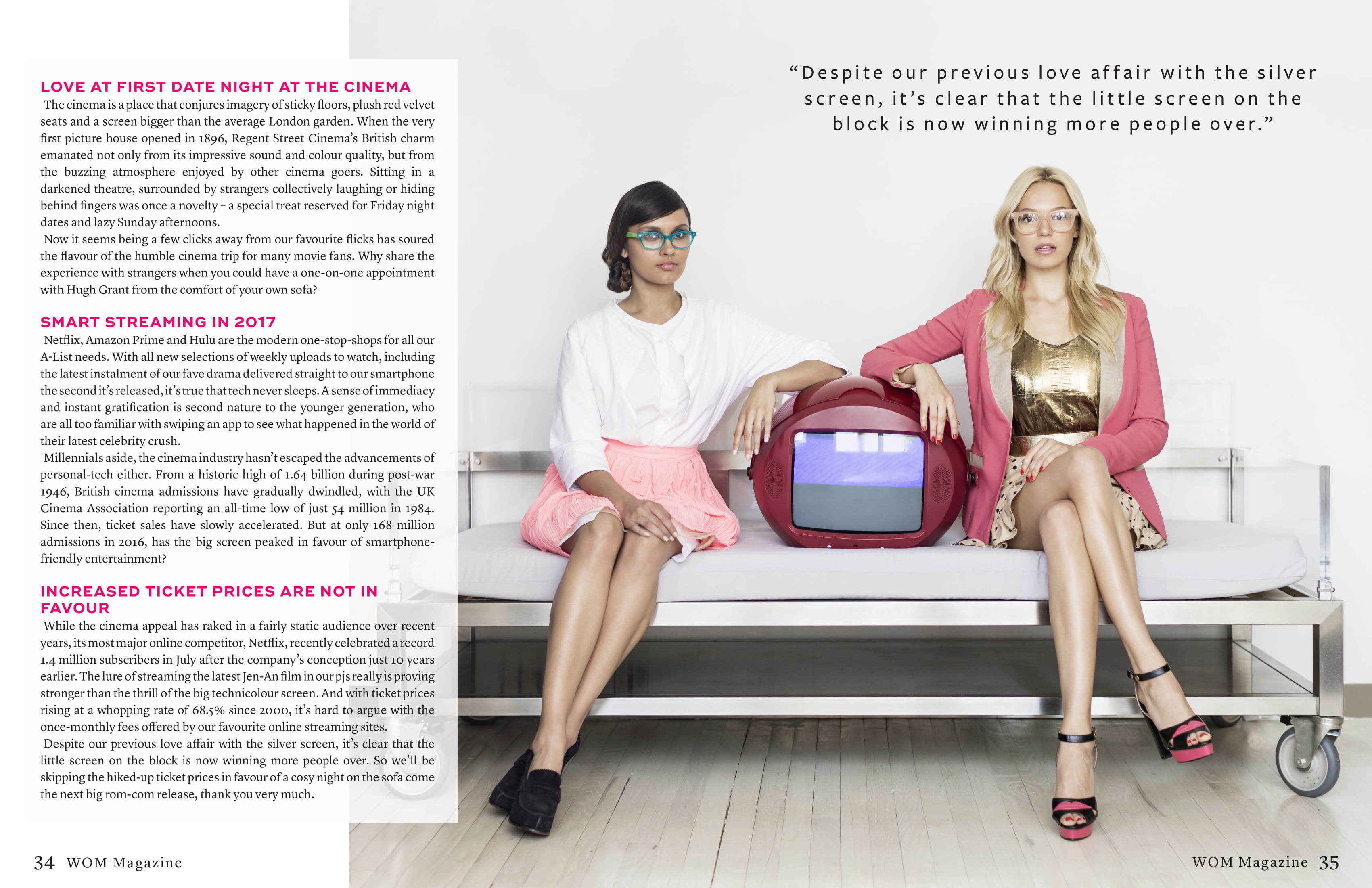 LOVE AT FIRST DATE NIGHT AT THE CINEMA The cinema is a place that conjures imagery of sticky floors, plush red velvet seats and a screen bigger than the average London garden. When the very first picture house opened in 1896, Regent Street Cinema’s British charm emanated not only from its impressive sound and colour quality, but from the buzzing atmosphere enjoyed by other cinema goers. Sitting in a darkened theatre, surrounded by strangers collectively laughing or hiding behind fingers was once a novelty – a special treat reserved for Friday night dates and lazy Sunday afternoons. Now it seems being a few clicks away from our favourite flicks has soured the flavour of the humble cinema trip for many movie fans. Why share the experience with strangers when you could have a one-on-one appointment with Hugh Grant from the comfort of your own sofa?
SMART STREAMING IN 2017 Netflix, Amazon Prime and Hulu are the modern one-stop-shops for all our A-List needs. With all new selections of weekly uploads to watch, including the latest instalment of our fave drama delivered straight to our smartphone the second it’s released, it’s true that tech never sleeps. A sense of immediacy and instant gratification is second nature to the younger generation, who are all too familiar with swiping an app to see what happened in the world of their latest celebrity crush. Millennials aside, the cinema industry hasn’t escaped the advancements of personal-tech either. From a historic high of 1.64 billion during post-war 1946, British cinema admissions have gradually dwindled, with the UK Cinema Association reporting an all-time low of just 54 million in 1984. Since then, ticket sales have slowly accelerated. But at only 168 million admissions in 2016, has the big screen peaked in favour of smartphonefriendly entertainment?
INCREASED TICKET PRICES ARE NOT IN FAVOUR While the cinema appeal has raked in a fairly static audience over recent years, its most major online competitor, Netflix, recently celebrated a record 1.4 million subscribers in July after the company’s conception just 10 years earlier. The lure of streaming the latest Jen-An film in our pjs really is proving stronger than the thrill of the big technicolour screen. And with ticket prices rising at a whopping rate of 68.5% since 2000, it’s hard to argue with the once-monthly fees offered by our favourite online streaming sites. Despite our previous love affair with the silver screen, it’s clear that the little screen on the block is now winning more people over. So we’ll be skipping the hiked-up ticket prices in favour of a cosy night on the sofa come the next big rom-com release, thank you very much.