SOCIAL MEDIA UPDATES AND TRENDS OF 2017 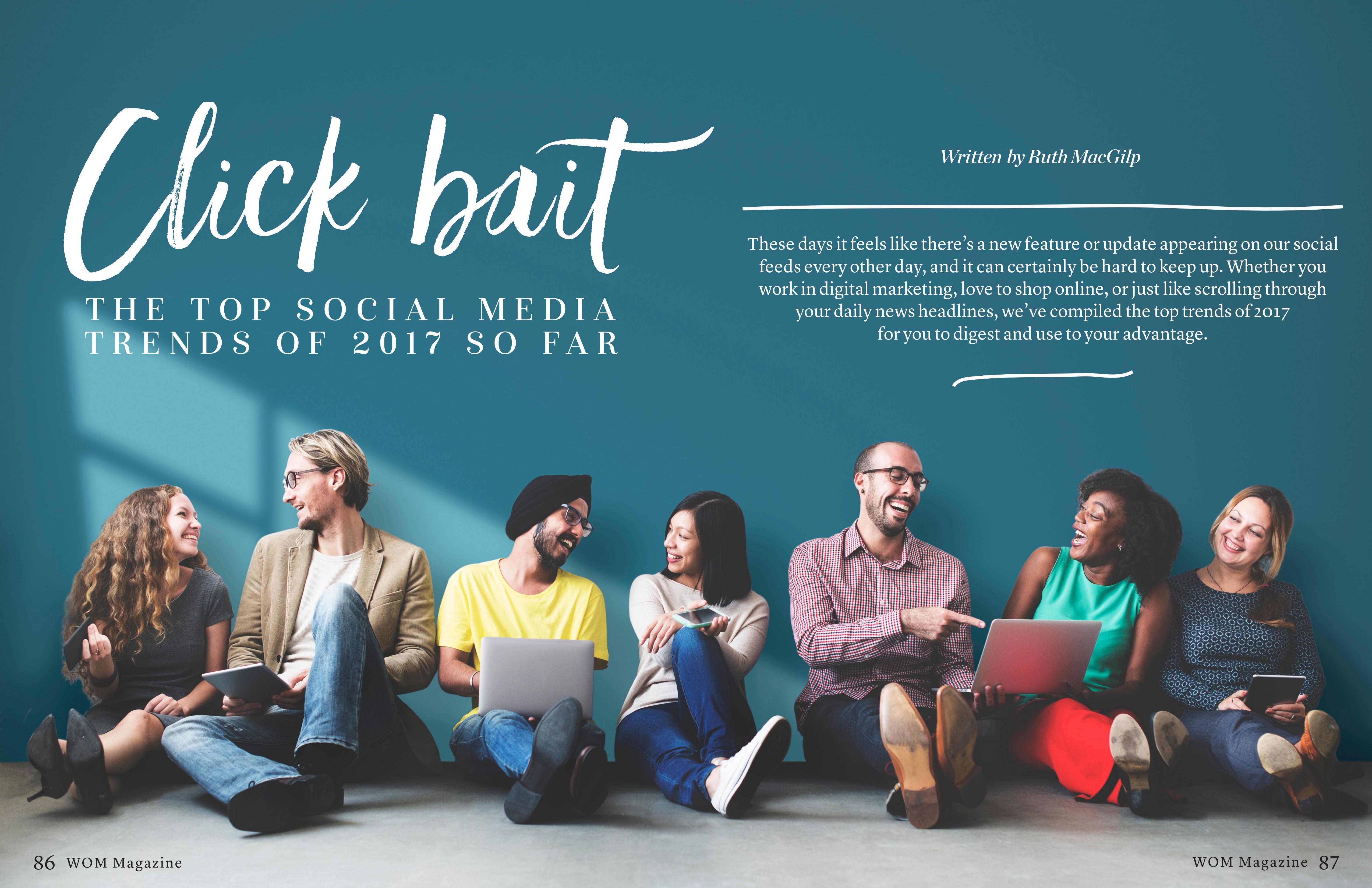 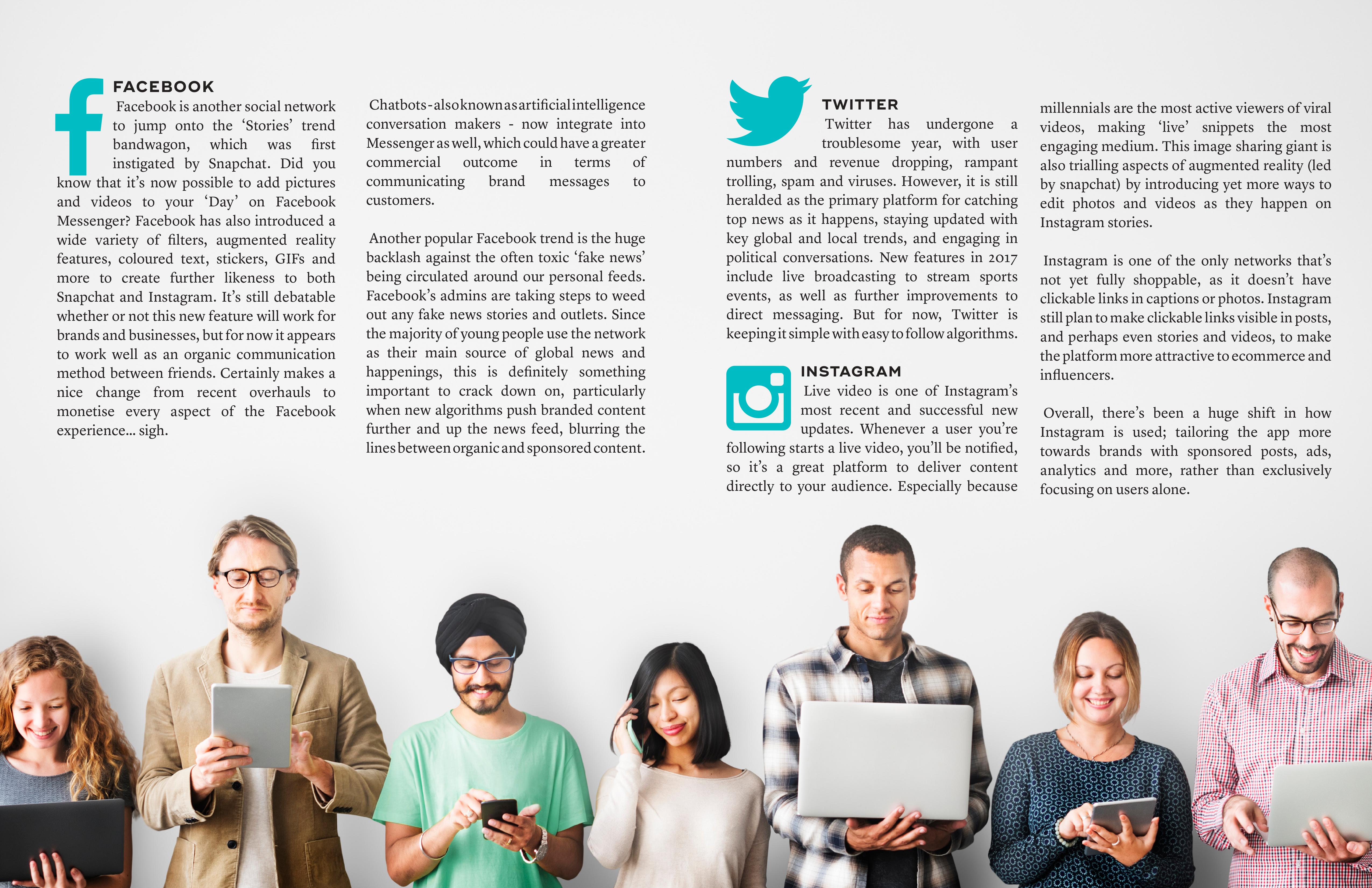 These days it feels like there’s a new feature or update appearing on our social feeds every other day, and it can certainly be hard to keep up. Whether you work in digital marketing, love to shop online, or just like scrolling through your daily news headlines, we’ve compiled the top trends of 2017 for you to digest and use to your advantage.Click bait Written by Ruth MacGilp
88 WOM Magazine 89 WOM Magazine
FACEBOOK Facebook is another social network to jump onto the ‘Stories’ trend bandwagon, which was first instigated by Snapchat. Did you know that it’s now possible to add pictures and videos to your ‘Day’ on Facebook Messenger? Facebook has also introduced a wide variety of filters, augmented reality features, coloured text, stickers, GIFs and more to create further likeness to both Snapchat and Instagram. It’s still debatable whether or not this new feature will work for brands and businesses, but for now it appears to work well as an organic communication method between friends. Certainly makes a nice change from recent overhauls to monetise every aspect of the Facebook experience… sigh.
Chatbots – also known as artificial intelligence conversation makers – now integrate into Messenger as well, which could have a greater commercial outcome in terms of communicating brand messages to customers.
Another popular Facebook trend is the huge backlash against the often toxic ‘fake news’ being circulated around our personal feeds. Facebook’s admins are taking steps to weed out any fake news stories and outlets. Since the majority of young people use the network as their main source of global news and happenings, this is definitely something important to crack down on, particularly when new algorithms push branded content further and up the news feed, blurring the lines between organic and sponsored content.
TWITTER Twitter has undergone a troublesome year, with user numbers and revenue dropping, rampant trolling, spam and viruses. However, it is still heralded as the primary platform for catching top news as it happens, staying updated with key global and local trends, and engaging in political conversations. New features in 2017 include live broadcasting to stream sports events, as well as further improvements to direct messaging. But for now, Twitter is keeping it simple with easy to follow algorithms.
INSTAGRAM Live video is one of Instagram’s most recent and successful new updates. Whenever a user you’re following starts a live video, you’ll be notified, so it’s a great platform to deliver content directly to your audience. Especially because
millennials are the most active viewers of viral videos, making ‘live’ snippets the most engaging medium. This image sharing giant is also trialling aspects of augmented reality (led by snapchat) by introducing yet more ways to edit photos and videos as they happen on Instagram stories.
Instagram is one of the only networks that’s not yet fully shoppable, as it doesn’t have clickable links in captions or photos. Instagram still plan to make clickable links visible in posts, and perhaps even stories and videos, to make the platform more attractive to ecommerce and influencers.
Overall, there’s been a huge shift in how Instagram is used; tailoring the app more towards brands with sponsored posts, ads, analytics and more, rather than exclusively focusing on users alone