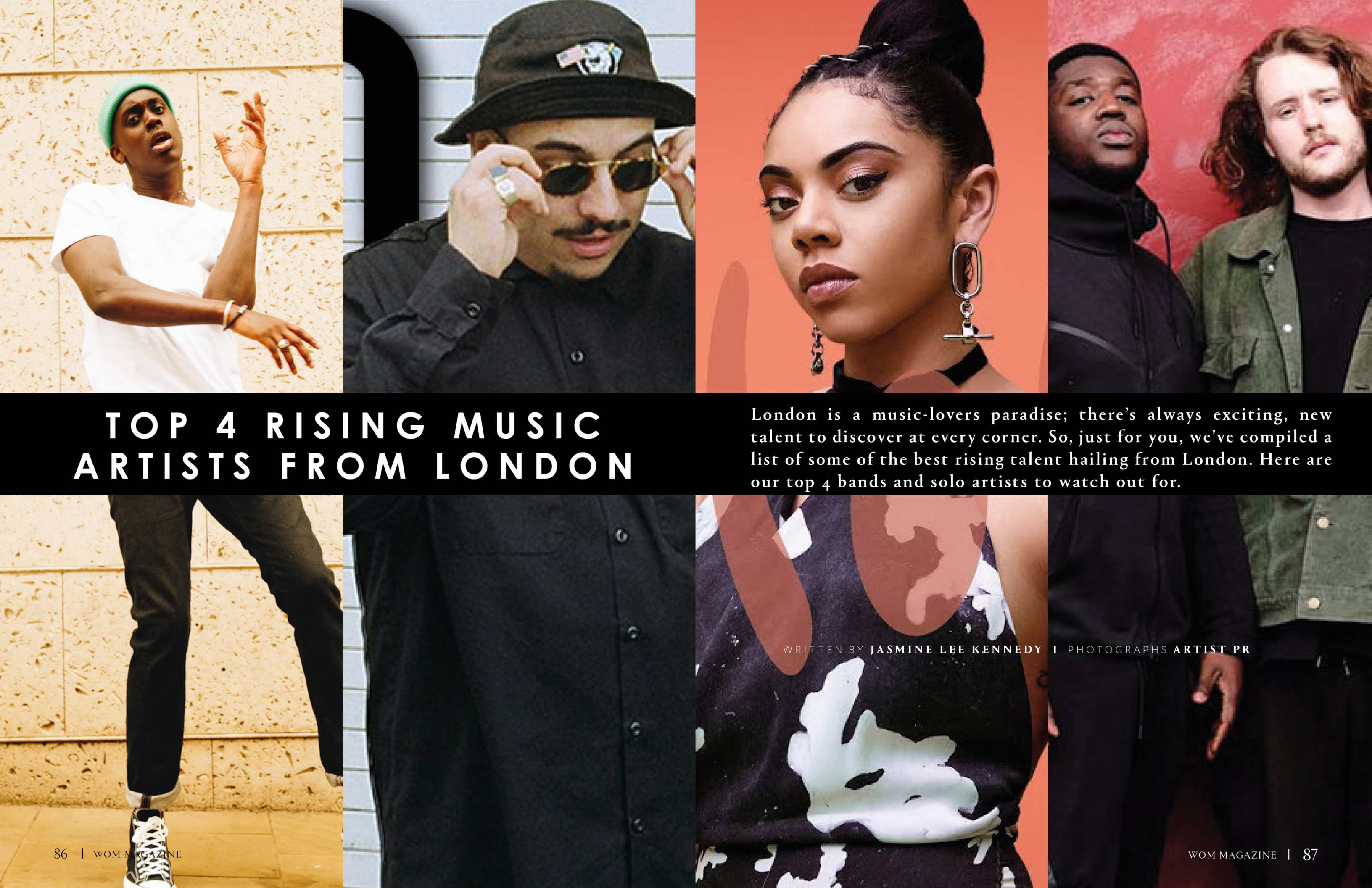 TOP 4 RISING MUSIC ARTISTS FROM LONDON
WRITTEN BY JASMINE LEE KENNEDY
London is a music-lovers paradise; there’s always exciting, new talent to discover at every corner. So, just for you, we’ve compiled a list of some of the best rising talent hailing from London. Here are our top 4 bands and solo artists to watch out for. 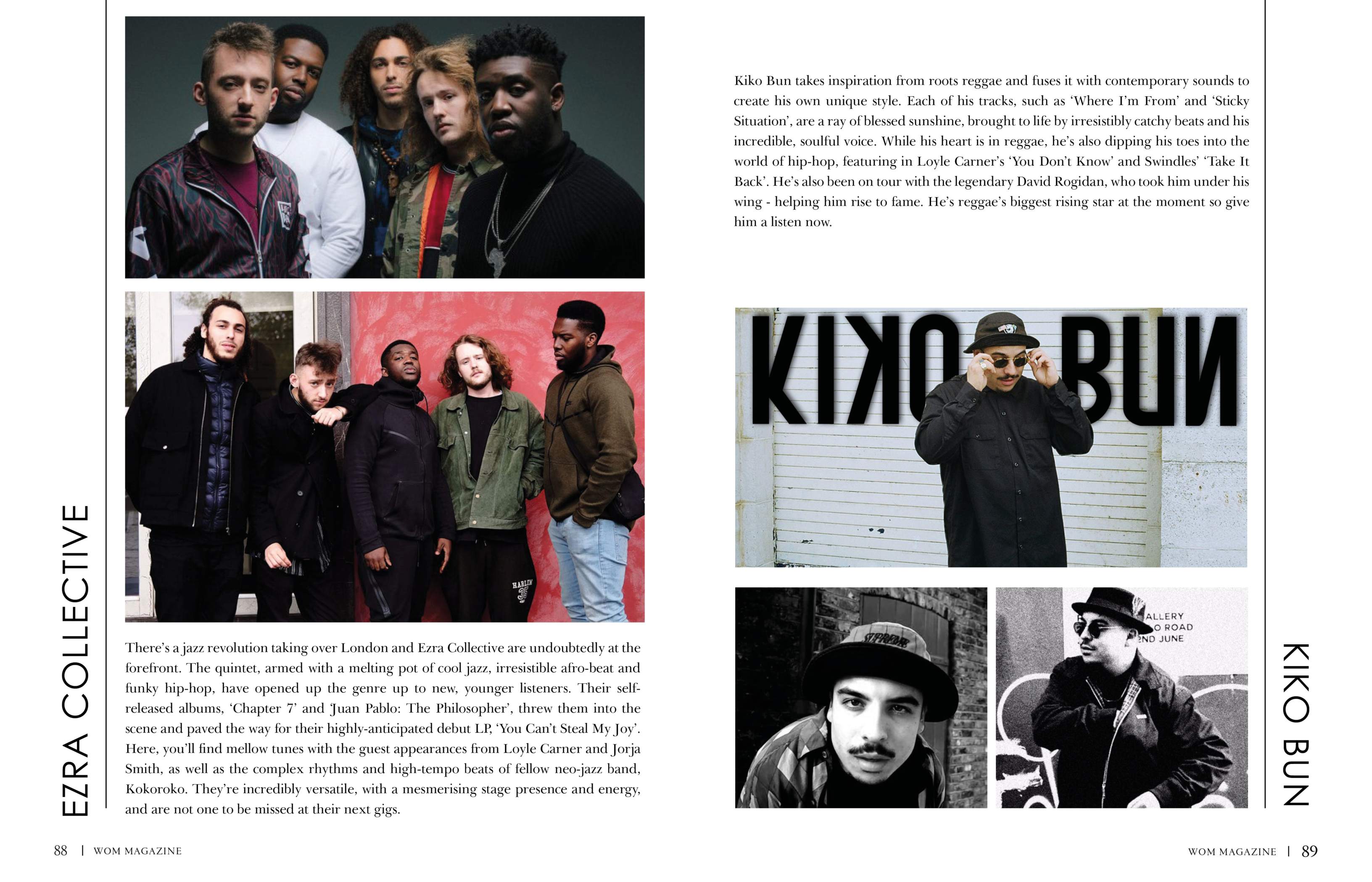 Ezra Collective
There’s a jazz revolution taking over London and Ezra Collective are undoubtedly at the forefront. The quintet, armed with a melting pot of cool jazz, irresistible afro-beat and funky hip-hop, have opened up the genre up to new, younger listeners. Their self-released albums, ‘Chapter 7’ and ‘Juan Pablo: The Philosopher’, threw them into the scene and paved the way for their highly-anticipated debut LP, ‘You Can’t Steal My Joy’. Here, you’ll find mellow tunes with the guest appearances from Loyle Carner and Jorja Smith, as well as the complex rhythms and high-tempo beats of fellow neo-jazz band, Kokoroko. They’re incredibly versatile, with a mesmerising stage presence and energy, and are not one to be missed at their next gigs.
Barney Artist
East London boy Barney Artist has seamlessly slipped into the rap scene, already having a sold-out tour and prolific repertoire under his belt. He effortlessly flows over jazzy, melodious riffs and boom bap beats, with his honest, introspective lyrics bringing a nice juxtaposition to some of the brag-rap we hear today. He’s always been eclectic, but his latest EP ‘Bikes Are Bikes’ is his most genre-bending to date, with trap beats harmoniously carrying dark instrumentals on ‘Splash’ while ‘Fall Away’ features enchanting piano chords and a sweet, angelic chorus. This guy’s going to get huge – so make sure to check him out while he’s still playing smaller, intimate venues.

Kiko Bun
Kiko Bun takes inspiration from roots reggae and fuses it with contemporary sounds to create his own unique style. Each of his tracks, such as ‘Where I’m From’ and ‘Sticky Situation’, are a ray of blessed sunshine, brought to life by irresistibly catchy beats and his incredible, soulful voice. While his heart is in reggae, he’s also dipping his toes into the world of hip-hop, featuring in Loyle Carner’s ‘You Don’t Know’ and Swindles’ ‘Take It Back’. He’s also been on tour with the legendary David Rogidan, who took him under his wing – helping him rise to fame. He’s reggae’s biggest rising star at the moment so give him a listen now.
Jaz Karis
Jaz was exposed to R&B from a young age, growing up in South London where she attended the esteemed BRIT school and fine-tuned her talents. Now, she’s a rising star who combines the soulful, relaxed sounds of R&B with contemporary jazz and hip-hop. Her music is stunning, experimental and melodic, being likened to that of Mahalia and Jorja Smith. While still in the early days of her career, she’s shooting to fame with millions having streamed her songs on Spotify and Youtube already. Make sure to check her out – she’s certainly one to keep on your radar.

A GUIDE TO VENTURE CAMPING

HOW DID JAZZ BECOME COOL AGAIN?

46 FITNESS HASH TAGS TO GET YOU NOTICED